What is the UNFCCC

The UNFCCC stands for the United Nations Framework Convention on Climate Change, an international treaty first agreed in 1992, of which Mongolia and almost all other countries in the world are members.  Today, it has near-universal membership, with 197 countries that having ratified the Convention, which are called Parties to the Convention. The goal of the Convention is to stabilize greenhouse gas (GHG) concentrations in the atmosphere at a level that would prevent dangerous interference with the climate system. Among other measures, industrialized states (the so-called Annex 1 countries) are required to reduce or limit emissions across sectors, which can include the land-use and forestry sectors.

Through the forum of the UNFCCC, countries negotiate agreements to enable the global community to mitigate climate change, as well as to adapt to the impacts of climate change. The UNFCCC provides guidance and support to developing countries in their efforts to combat climate change. For REDD+ specifically countries have to establish four main REDD+ elements which are laid out and described in decisions and guiding documents of several climate change conferences: 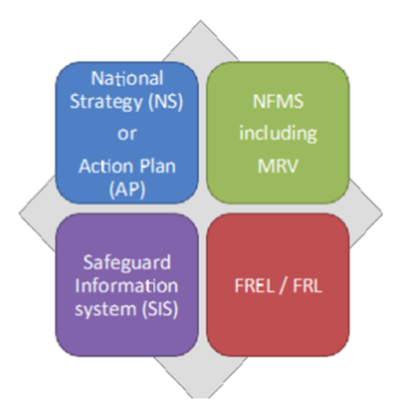